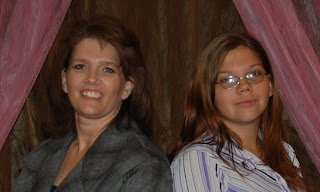 I’m coming before you to say thank you for your prayers for Megan. People at my work, people at my Church, friends and family members! Your prayers are what is getting us through this time of not knowing what is going on with Megan. Every time you pass me and say I’m praying for Megan – I was encouraged. I also passed that information along to Megan and again, it encouraged me.
I must take a moment to express my utter respect for those that I follow on Twitter! I absolutely can not name ALL of your names, but YOU have touched my heart so deeply today! It is hard to find words great enough to express my deepest feelings!
A brief history on what you are praying for:
Megan’s stomach trouble started 2 years ago. Horrible pain immediately after eating. Her GI quickly diagnosed it as IBS and gave appropriate medication. I never believed it was that but the medicine helped some, so we went on about our merry little ways – dealing with the pain as needed.
In March of this year, we returned to the GI with nausea and he upped her Prilosec. Ordered Endoscopy and biopsies to be taken. All came back clear. No cancer, no bacterial infection no nothing – all “normal”. April Megan started vomiting her foods several times a week. Dr. then upped her Bental and ordered more tests. All “normal”. In May the several times a week turned into each meal that had meats in it and other “hard” foods. Soft foods like cheesy smashed potatoes, good ole Southern Grits, yogurt, pudding, eggs and the like were ok. Megan was given a Gastric Emptying Scan. She was required to eat more food than she has been able to keep down since April. She ate and was scanned. An hour later another scan. The next scan was the hardest. After many tears because she couldn’t “hold down the food” any longer they took the scan and she immediately vomited. She told the technician she threw up less than half of the food. The 4th hour scan showed that only 39% of the food was gone. (Well last time I checked – 39% is less than half!) Finally – a test that showed NO digestion. I just knew that our prayers had been answered and resolution would soon be on the way!
The beginning of June Megan was admitted to hospital for 2 days for observation. She was given Reglan 3o minutes before each meal and still – vomiting of all solids was taking place. So soup for “snacks” it is. Before leaving the hospital – we found out that mashed potatoes and grits were no longer staying down. Even though the Dr. was thinking Gastroparesis – his lasts words to me was – I’ve never seen this and I don’t know what to do. Sent me back to our pediatrician for a referral to another specialists.
We have waited on this appointment for July 20th at 1:3opm for 5 l-o-n-g weeks now. And now – yogurt, as of last week, is not digesting. And as of last night 7-17-09 – liquids are officially having to be “held down”. (she can really hold in her vomit…truly) She wants to drink but the pain of the liquids going into her stomach is to great. The nausea that goes with it is so hard to bear. She is sleeping alot today to get through this. (4 ounces an hour – not working. No worries though, if need be, I will take her to ER for hydration.)
Present day – (finally – you say…get to the point!!!) Ok, already. I sent out a tweet this morning asking for prayer for wisdom for the new Doctor on Monday. Told about the liquids now giving her problems and then it happened.
#prayers4megan being tweeted about over twitter!
I know there are so many children out there with terminal illnesses. I know I can never in a million years understand what they or their mothers are going through! One thing I’m certain of is that I would not have made it through these past few months with out prayers!
Few people knew about Megan way back in March. Then a few more and a few more. This morning, after a sleepless night of prayer – I knew I had to ask for prayer. I knew several would step up and answer but I had no clue how those acts of joy would affect me!
My eyes swelled with tears as I read tweet after tweet of people asking for prayers for Megan. Then – names I didn’t even recognize started showing up. (I must happily say that I am now following those people – because I want to follow great people like they are!)
I showed my husband the outpouring of your prayers and he was in complete awe by what he was seeing, as was I!
I come to you today to humbly say thank you! It has always been (and will always be) my goal to be spreading joy to each of you but today…I was a recipient of such a magical gift! I realize that I must be diligent about spreading joy because of the encouragement and inspiration I received from your acts of joy! I must not tire, I must not fail. I must press on! And with God’s help and your prayers and encouragement – I believe I can do so.
If you have prayed for Megan – thank you!
If you have asked others to pray for Megan – Thank you!
Megan thanks you too!
A million thank yous could never be enough! Never!
YOU are great at Spreading Joy!
“Love only grows by sharing. You can only have more for yourself by giving it away to others.” Brian Tracey
Thank you guys for sharing!
Photo: Mother’s Day 2009 Marie & Megan